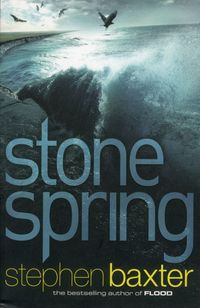 8,000 years ago Europe was a very different place. England was linked to Holland by a massive swathe of land. Where the North Sea is now lay the landmass of Northland. And then came a period of global warming, a shifting of continents and, over a few short years, the sea rushed in and our history was set. But what if the sea had been kept at bay? Brythony is a young girl who lives in Northland. Like all her people she is a hunter gatherer, her simple tools fashioned from flint cutting edges lodged in wood and animal bone. When the sea first encroaches on her land her people simply move. Brythony moves further travelling to Asia. Where she sees mankind's first walled cities. And gets an idea. What if you could build a wall to keep the sea out? And so begins a colossal engineering project that will take decades, a wall that stretches for hundreds of miles, a wall that becomes an act of defiance, and containing the bones of the dead, an act of devotion. A wall that will change the geography of the world. And it's history. Stephen Baxter has become expert at embedding human stories into the grandest sweeps of history and the most mind-blowing of concepts. STONE SPRING begins a trilogy that will tell the story of a changed world. It begins in 8,000 BC with an idea and ends in 1500 in a world that never saw the Roman Empire, Christianity or Islam. It is an eye-opening look at what history could so easily have been and an inspiring tale of how we control our future.